This site can not be viewed in landscape on your device. Please orient your device to portait.

History Of The Wanderers Golf Club

Many words have been written about Victor Kent, whose vision was probably the most important single factor in ensuring the survival of The Wanderers Club after the Second World War.

It was he who took upon himself the decision to purchase the land now known as Kent Park in illovo. The fact that he as the chairman of The Wanderers Club, made the commitment without consulting his fellow committee members gives us an insight into his opinion of the far sightedness of the other members of that committee.

After the dust had settled he further revealed his hand. Not only was he motivated to protect the future of The Wanderers Club by relocating to a safe haven, but he also determined to provide a less physical sporting outlet for older members of the club by creating a golf course.

To this end he procured the advice and expertise of his good friend Felix Oliver, a member of the club, who played a more than competent game of golf at the Royal Johannesburg Golf Club. The Golf course designed by Bob Grimsdell under the supervision of Felix Oliver.

Construction commenced in 1937 and the course was opened in 1939 with 10 playable holes. In 1942 the remaining eight holes were completed. The membership level was set at 350 for gentlemen and 150 for ladies, a far cry from acceptable levels today.

Fees were set at thirty guineas for gentlemen and twelve guineas for ladies. The annual subscriptions were eight guineas and two and a half guineas respectively. Appropriately, the first chairman of the club was Victor Kent and Felix Oliver was the first captain, the office he held throughout the Second World War years. The first lady captain was Mrs K Deane, a well known name in the history of our golf club. The first secretary, as the incumbents were then known, was Doug Meintjes, who, it appears, was responsible for just about everything, and the first professional was Mickey MacDonald.

The first hole-in-one was achieved by Bill Trollip, a founder member and subsequently captain, chairman and an honorary life member. This took place on 20th March 1940. In those days the achievement of the ultimate perfect fluke was marked by the affixing of a small silver plaque to the wall of the main bar, recording the name of the player, the hole and the date.

It is a matter of good fortune that these plaques survived the fire and were returned to their rightful home after the clubhouse was reconstructed. When, in 1993, the old plaques were again relocated, it was fitting that the unveiling ceremony was performed by none other than I W R Trollip. The first club championships were held in 1946 and the first champion was Mr V M Sheahan. Mrs N Roberts was the first lady champion. The first albatross was scored by Basil Shaw in 1952.

Designed by Bob Grimsdell, and under Felix Oliver’s direction, construction of The Wanderers Golf course began.

Course lost three holes and was re-designed to accommodate the building of The Wanderers Cricket Stadium.

Original clubhouse burnt down and a new clubhouse was built.

“State of the art” irrigation installed.

Course re-designed by Rob O’Friel. Greens and bunkers rebuilt according to USAGA specifications.

Inspiration For The Wanderers Club Badge Goes Back To 352 Bc

According to the Wanderers Centenary Souvenir Handbook, Arthur Ruben was responsible for uplifting the club emblem from an Olympic medal, which he saw at the 1908 Games. He suggested the adoption as a crest for the Wanderers badge. After a competition, in which there were thirty-one entries. Arthur Ruben’s design of a Roman chariot was accepted.

This may well be the case, but I believe that the emblem came from the reverse of a Stater struck by Philip II of Macedon and was known as Philippeioi. This coin was very popular and was accepted in all areas and countries where trade and commerce was carried out, even as far as Gaul (France) and ancient Britain.

Among numismatologists it is regarded as the forerunner of the British sovereign. Even after Philip’s death in 336 BC, Macedon continued minting the coin in large quantities.

It was in 356 BC that Philip managed to conquer and bring under his rule the City States of Thrace, Thebes, Athens, Corinth, etc, from which to create an army which would enable him to throw off the yoke of dominance exerted by the Persians.

After his assassination in 336 BC, his son Alexander the Great carried out the attack on the Persians and defeated Darius the Great at the battle of Granicus. He went on to conquer the Persian Empire, Egypt and the rest of the civilised Asian world.

Philip’s principal coin, being the Stater, was used to pay his soldiers and to finance his assault on Persia.

On the obverse is the laureate head of Apollo, the god of manly youth, sunlight, poetry and music.

On the reverse is a two horse chariot, or biga, with galloping horses driven by a boy jockey, to commemorate his victories at Olympia in 352/348 BC, together with his name Philip (Piairroy)

From the foregoing and the accompanying photographs, it can be seen and be conclusively accepted that the theme for the Wanderers badge was copied from the Stater commemorating Philip’s victories at Olympia and I think it is a worthy emblem for a prestigious sporting club. 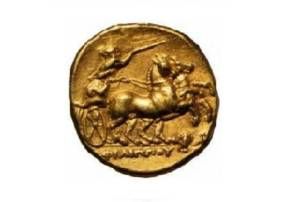 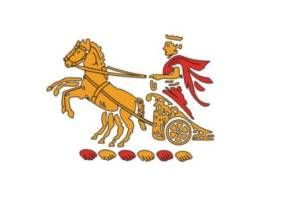 The P.G.A., played the world over, is truly the ‘professionals tournament”. It is generally organised and run entirely by the professional association. In South Africa the P.G.A. was first held at Houghton in 1965.

It owes its origins to Gary Player and Brian Henning, who put up their own money to get the tournament off the ground. Thereafter its success was assured. That first tournament was won by Harold Henning, who repeated the feat in the following two years. Gary Player and Dale Hayes share with Harold the achievement of recording three wins each. The lowest score to win the P.G.A. belongs to Bobby Cole who won in 1986 with a score of 265. This was matched in 1993 by Mark McNulty.

In 1971 the redoubtable Louis Luyt approached the club with an attractive proposition to provide an underground fairway water irrigation system. This project was to be linked to his Luyt Lager becoming the sponsor of the future P.G.A. tournaments, with The Wanderers becoming the permanent home for this event. The deal was struck and the first P.G.A. was played at the Wanderers in January 1972. It was won by Harold Henning and a year later by the great American player Tom Weiskopf. Thus began an association with the P.G.A. that endured for 23 years. Lexington took over the sponsorship in 1977, until they relinquished it in 1995. During this period, we were privileged to play host to many of the world’s best golfers, including Lee Trevino, Tom Weiskopf, Tom Lehman, Corey Pavin, Hale Irwin, David Feherty and, of course, our well known South African players.

The P.G.A. was always regarded by the professionals as one of the best organised and run tournaments on the Sunshine Circuit. This was due to the part played by dedicated staff and extreme commitment from both lady and gentlemen members who looked forward to this annual event with joy.

Past Winners of the Lexington PGA